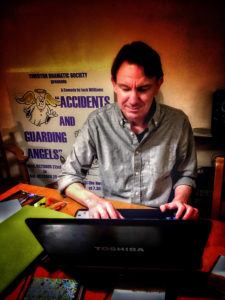 Jack began his introduction to theatre appearing on stage and directing in Tiverton, Devon. He’s been part of many varied productions including ‘Pantomimes’, ‘The Diary of Ann Frank‘, ‘Guys and Dolls‘, Little Shop of Horrors‘, ‘Dad’s Army‘, ‘Fiddler on The Roof‘ and ‘Blithe Spirit‘. Jack was educated in Mid Devon and still lives in the area; he has a great fondness for the local characters.

He started writing around 2008 and found out quickly that he could use his imagination quite vividly to create colourful characters. Jack immersed himself in research to get every detail correct and gradually leaned towards fast paced comedies. With an experience of performing on the stage, Jack took what he’d learnt and started to write a script.

He is eternally grateful to a few of his close friends and colleagues who have shown their continuous support. His influences stem from classic British comedies. Jack is also a music lover of all styles, and tries to incorporate music wherever he can in his plays. He wrote ‘The Birds, The Bees and Therapy‘ over the course of 2011, and the Tiverton Dramatic Society premiered the play in October 2012.